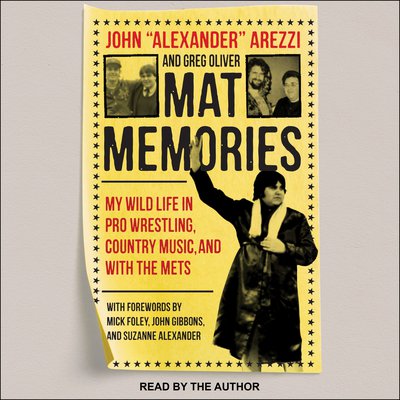 My Wild Life in Pro Wrestling, Country Music and with the Mets

John Arezzi was a lifelong Mets fan who dreamed of a job in baseball. In 1981, he took a job with the Mets Class A team in North Carolina. But Arezzi had another love: professional wrestling. He ran a fan club for the villainous "Classy" Freddie Blassie as a teenager, then progressed to wrestling photographer, and finally even stepped into the ring himself as John Anthony. Eventually he escaped to pursue a new life in altogether different world: country music. After adopting a new name, John Alexander, his many accomplishments include discovering both Patty Loveless and (decades later) Kelsea Ballerini. But wrestling is tough to shake . . .

In the 1990s, Arezzi hosted the pioneering radio talk show Pro Wrestling Spotlight. He also ran the first major conventions, assembling a wrestling who's who to meet with fans. He promoted shows, both at home and abroad, and was a key figure behind importing lucha libre into America.

Mat Memories is Arezzi's chance to hold the mic, and he holds nothing back—he names names and tells the untold behind-the-scenes stories: from the ring, the stage, and the diamond.