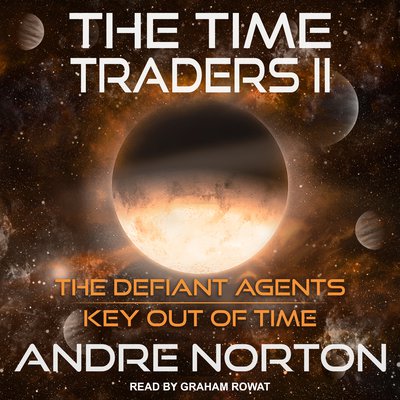 The Defiant Agents and Key Out of Time

Exploring space and time is a dangerous business, and no one knows this better than Time Agents Travis Fox and Ross Murdock. So when both men are stranded on far-off planets with no hope of rescue from Earth, they must rely on their wits and their training to survive.

But survival is only the beginning. To better handle the rigors of the alien world of Topaz, Fox and his crewmates have been implanted with the memories of their Apache ancestors—but the Opposition has sent its own team with the reawakened memories of their Mongol ancestors!

Meanwhile, Murdock is trapped in the ancient past of the water world of Hawaika, facing terrifying wizards in a kingdom he knows will soon be utterly annihilated by an alien empire that is bent on the conquest of the entire galaxy.

The fates of two worlds, and possibly the galaxy itself, will be determined by the actions of these castaways in time—and whatever happens, the lives of Time Agents everywhere will be changed forever . . .