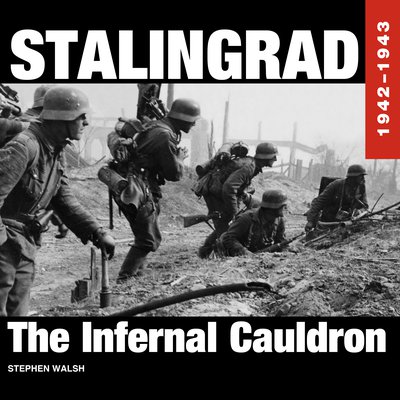 The German invasion of Russia was Hitler’s biggest gamble in his quest for ‘Lebensraum’ in the East – and it was at Stalingrad that his gamble failed. Stalingrad is a comprehensive history of the greatest battle of World War II, a defining moment in the struggle on the Eastern Front, which has been called the Verdun of World War II. From an About.Com review of the illustrated print edition: "Anthony Beevor’s Stalingrad is wholly worthy of its fame. Fortunately for publishers, there are many ways to write history and Stephen Walsh's account of Stalingrad offers a strong alternative: a military history. Walsh may cover the same ground … but his is a narrative of logistics and tactical planning, an account of where troops moved and fought, why plans were conceived and what they meant militarily. There's a large overlap between Beevor and Walsh - both include the same basic detail - but Beevor's prose is more personal … while Walsh's text considers the limits of German national power and the nature of Vernichtungschlacht warfare. Where Beevor discusses the difficulty of providing exact figures Walsh just gives them and where Beevor's writing is ceaselessly gripping Walsh is more sedate, educational and discursive. In short, these books are aimed at different audiences: anyone who likes reading will enjoy Beevor, but someone who wants the military specifics and contexts will benefit more from Walsh. Another bonus is a chapter on Army Group A and their campaign in the Caucasus, an event presumably omitted from Beevor's Stalingrad on grounds of relevance, but one which helps place the siege on context. Walsh's book is an excellent military history, but Beevor's is better suited to a broader audience: in terms of text, neither is more wrong nor right than the other, but Walsh feels like a documentary and Beevor like a feature film. It might seem unfair to constantly compare The Infernal Cauldron to Stalingrad, but I urge everyone who reads one to study the other too. No one should miss out on Beevor's style and treatment of both history and humanity, while The Infernal Cauldron is a superb, maybe even essential, companion to Stalingrad.”