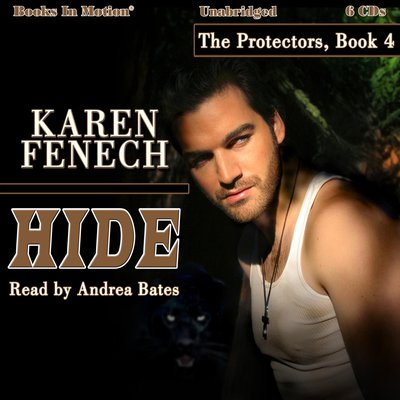 THE PROTECTORS: Though they work independently and at times are oceans apart, their ties to each other remain strong. They’re related by blood or bond – this group of men and women in law enforcement, government intelligence, and the military who do what others cannot to serve, defend, and protect.

HIDE: The Protectors Series - Book four. Allison Sandoval is on the run after discovering the secret her new husband, Rafael, the leader of a South American country, has kept hidden from the world. She must tell what she knows and stop Rafael but she is on her own, physically weakened by his abuse, and she is running out of time. Former Navy SEAL Zach Corrigan, owner of a Special Ops organization, accepts the job to find Allison, a woman he is told is mentally ill and who suffers from hallucinations and paranoia.

But when Zach finds her, something isn't right and after he returns her to her husband, Zach can't get her out of his mind or the belief that he's made a mistake in taking her back. Zach is determined to right that wrong. What began as a job is turning into something more. With Zach, Allison finds a refuge and something she’d given up on, hope. But Rafael isn't the only one hunting Allison. The CIA wants her too. Zach will do everything in his power to make Allison safe, beginning with finding a place for her to hide. But with enemies all around them, there is no place to hide . . .