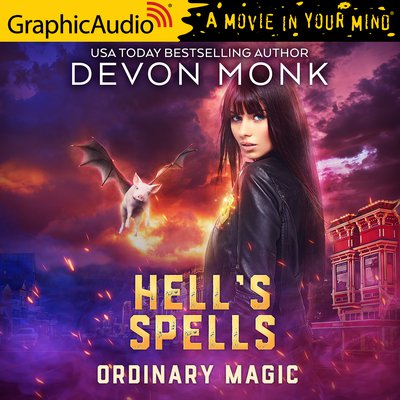 "In a town like Ordinary, anything can happen. Unfortunately for Delaney Reed, it usually does... Sheriff Delaney Reed’s little beach town where gods vacation and monsters reside is finally back to normal. No possessed souls, no vortexes to hell, and absolutely no one’s turned into a frog lately. Then the queen of demons appears in her backseat begging to hide out in Ordinary, and Delaney knows her peace and quiet is over and out. Dealing with a demon fugitive isn’t the only thing on Delaney’s plate. She’s also trying to figure out why her boyfriend, Ryder Bailey, has been sneaking out of town every night and why her sisters are keeping secrets. But when the gods in town begin to act funny, Delaney knows something strange is going on. It might have something to do with two powerful magical items that suddenly go missing. Or it might have something to do with those little gaps of time Delaney’s been losing, and the memories she can’t quite recall… Performed by Colleen Delany, Megan Dominy, Andy Brownstein, Nick DePinto, Karen Novack, Henry Kramer, Amanda Forstrom, Richard Rohan, Marni Penning, Danny Gavigan, Holly Adams, Debi Tinsley, Jonathon Church, Matthew Schleigh, Nanette Savard, Bradley Foster Smith, Ren Kasey, Evan Casey, Bruce Alan Rauscher, Lise Bruneau, Zeke Alton, Bianca Bryan, Chris Genebach, Stephon Walker, Torian Brackett, Michael John Casey, and Jillian Levine-Sisson."