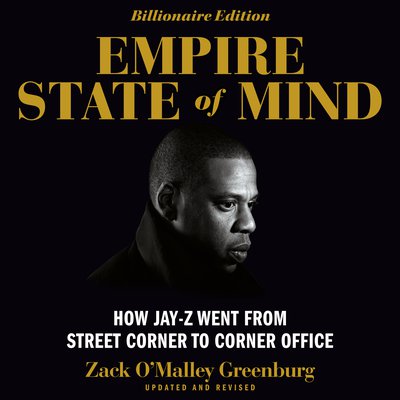 How Jay-Z Went From Street Corner to Corner Office

Now updated and revised—from a Forbes senior editor, a compelling portrait of American rapper Jay Z and his rise from the Brooklyn projects to the top of the business world.

Only a handful of people embody the legacy of hip-hop and entrepreneurship like Jay Z. A modern-day King Midas, everything he touches—sports bars, streaming services, record labels, and cognac—turns to gold. How exactly did he do it?

Forbes senior editor Zack O'Malley Greenburg reveals the story of Jay Z's legendary rise from the Marcy Projects of Brooklyn to stages and corner offices worldwide. He draws on over 100 interviews with those who knew Jay Z from the beginning: his classmates at George Westinghouse High School; the childhood friend who got him into the drug trade; and the DJ who convinced him to stop dealing and focus on the music. Also bearing witness are the artists who worked alongside him, including J. Cole and Alicia Keys.

Jay Z's life is a blueprint for any hustler, businessperson, and entrepreneur who seeks to build something spectacular.