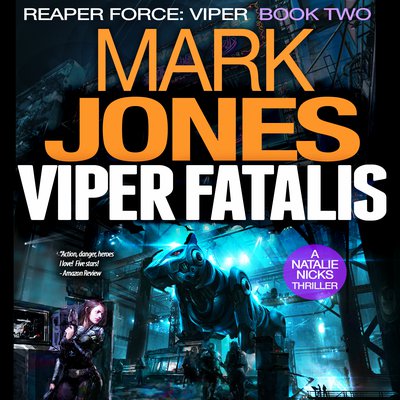 “This is the second book in the series and just as good if not better than the first...another series that I don’t ever want to finish! Right up my street, could not put it down! 5 stars!”

“A cinematic spy thriller you can't put down!”

“Impossible not to think of a great James Bond movie!”

VIPER FATALIS tells the story of the Defense Intelligence Agency officer, Natalie Nicks, codenamed Viper, and her ongoing battle against an evil terrorist syndicate hell-bent on using the weapons of the future against the United States of America.

During a mission to recover a truckload of newly developed ground sensors, Natalie Nicks stumbles upon a more deadly piece of futuristic technology—an autonomous robotic animal that's savagely killing everything in its path—but the Pantherix is just the tip of the iceberg.

With her old army friend, Sheriff Brett Diaz, by her side, Nicks uncovers a connection to a new drug cartel with a penchant for state-of-the-art technology—and plans that threaten the security of America’s southern border. Can the vicious El Draco be stopped? Having finally embraced her cybernetic powers, Natalie Nicks is more dangerous and deadlier than ever before. But so are the forces working against her.

She soon finds herself dodging a ruthless assassin known as Mr. Brightside, fighting off a gang of brutal sicarios, and going all-in to save the life of a young gifted boy that could be the key to unlocking the entire scheme—a conspiracy that may reach as high as the United States Senate.

Viper Fatalis is the second book in Jones’s electrifying new technothriller series and his most gripping thriller yet. The nonstop action, and relentless pacing make Viper Fatalis a one-night read you’re sure to enjoy. Fans of Ian Fleming, James Rollins, and Brad Thor will love it! Grab your copy today and join the adventure!