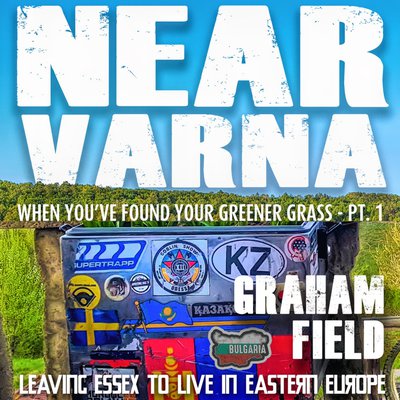 Why do we travel, what are we looking for, and will we recognise it if we find it? With the author’s 50th birthday looming, there seemed a need for something significant to happen. Not seeing an expiry date on his birth certificate made it hard to gauge when to have a mid-life crisis, but he’d almost definitely left it too late. On Midsummer’s Day Graham embarked on what he expected to be an unadventurous European tour on a KTM Adventure motorcycle to contemplate the imminent homelessness he was facing. With the feeling that the oyster his world had previously been was now merely resembling a shell of its former self, decisions had to be made. This is a tantalising insight into the mind of a wanderer who found the greener grass that had evaded him over a lifetime of travel. Discovering a place he thought didn’t exist led him to take a reckless gamble based on a gut feeling. This is the author’s fourth published diary, always humorous, insightful, reflective, anecdotal and, ultimately, brutally honest. On first impression, Bulgaria met every need, the best of every country he’d found in his explorations - uncrowded and untamed, with snow-capped mountains and Black Sea beaches, exotic neighbours in Islamic Turkey, sun-baked and bankrupt Greece, mystic Romania and recently unsettled Serbia. Twenty-five years after the fall of communism, the European Union’s most easterly member felt like a place where east met west. As the summer passed, it soon transpired there was far more to immigrating than simply relocating. Nirvana is a place where, once found, roots grow, and the pace of life slows to seasonal changes. But ties have to be severed before you can unplug, sit back and watch with wonder as the planet rotates , all whilst trying not to drink too much. This book is a welcome return to a style of travel writing that offers the reader something both achievable and inspirational.