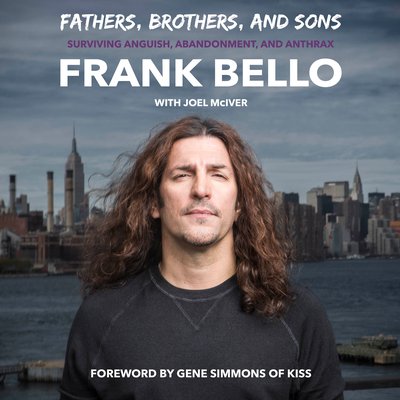 Born into a family of five, Frank Bello grew up in difficult circumstances. His father abandoned his wife and children. Left with no male role model, Frank found inspiration in heavy metal bass players, following their example and forging a career with Anthrax from his early teens—first as a roadie, and then as the group's bass player.

International stardom came Frank's way by the mid-to-late 1980s, when he was still in his early twenties, but tragedy struck in 1996 when his brother Anthony was murdered in New York. Although the case went to trial, the suspected killer was released without charge after a witness, intimidated by violent elements, withdrew his testimony.

Two decades later, Frank is a father himself to a young son. Like many men who grew up without the guidance of a dad, he asks himself important questions about the meaning of fatherhood and how to do the job well. This is the wisdom which Fathers, Brothers, and Sons offers listeners.

Frank doesn't preach or seek sympathy in his book. Instead, he simply passes on the wisdom gained from a lifetime of turbulence, paying tribute to his loved ones in a way that will resonate with us all.