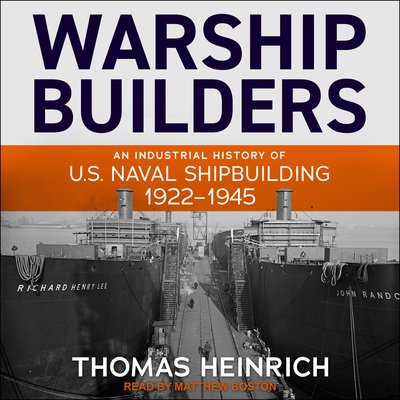 Warship Builders is the first scholarly study of the U.S. naval shipbuilding industry from the early 1920s to the end of World War II, when American shipyards produced the world's largest fleet that helped defeat the Axis powers in all corners of the globe. A colossal endeavor that absorbed billions and employed virtual armies of skilled workers, naval construction mobilized the nation's leading industrial enterprises in the shipbuilding, engineering, and steel industries to deliver warships whose technical complexity dwarfed that of any other weapons platform.

Throughout the book, comparative analyses reveal differences and similarities in American, British, Japanese, and German naval construction. Heinrich shows that U.S. and German shipyards introduced electric arc welding and prefabrication methods to a far greater extent than their British and Japanese counterparts between the wars, laying the groundwork for their impressive production records in World War II. While the American and Japanese navies relied heavily on government-owned navy yards, the British and German navies had most of their combatants built in corporately-owned yards, contradicting the widespread notion that only U.S. industrial mobilization depended on private enterprise.