As a Man Thinketh 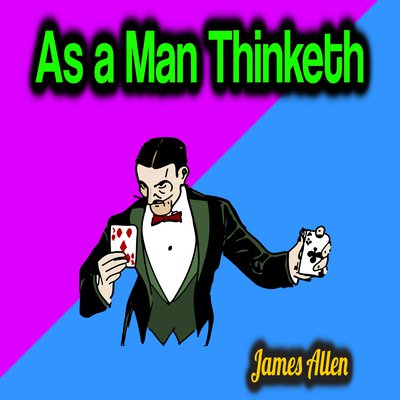 As a Man Thinketh

As a Man Thinketh James Allen - Allen's books illustrate the use of the power of thought to increase personal capabilities. Although he never achieved great fame or wealth, his works continue to influence people around the world, including the New Thought movement. A man is literally what he thinks, his character being the complete sum of all his thoughts," is one of the quotes from James Allen's classic self help books, As a Man Thinketh. Published in 1902, it provides many more such insightful concepts on the power of thought and its effect on a human being's personality and behavior. This volume is more of a literary essay than a complete book and its title is based on a Biblical proverb, "As a man thinketh in his heart, so is he." Taking this piece of ancient wisdom further, James Allen explores the far-reaching effects of the inner workings of a person's mind and motivation. He proposes that projecting one's own desires, goals and needs in the outer world can provide clues to a person's character. Thinking and the subconscious mind are assumed to be hidden from the outside world, and hence powerless to change the course of events or circumstances of one's life. However, in this book, Allen presents ideas that can harness this subterranean force and bend our lives to our will if we so choose. James Allen was a British writer who wrote mostly about everyday philosophy for the lay person and was in a sense, a pioneer of the self help movement. His books and poems were inspirational pieces, meant to help people realize their own powers and take charge of their lives rather than being mere tools in the hands of destiny. Born in a working class family in Leicester, England, Allen and his younger brother grew up in straitened circumstances. His father, a factory worker, traveled to America in search of a better job, but was tragically attacked and killed by criminals in New York. James, the older son, was compelled to leave school and seek work back in England. He found employment as a secretary to a stationer and later worked as a journalist. He later discovered a deep and enduring interest in spiritual matters when he began working as a writer with a magazine devoted to spiritual themes. His first book From Poverty to Power was published in 1901. Subsequently, he also launched his own spiritual magazine. As a Man Thinketh was his third and most famous book. It became an instant bestseller and the sales of this tiny volume were so great that they allowed Allen and his family to retire to the country, buy a house and live in relative comfort for the rest of their life. The book's language is very simple and the message presented here will certainly provide a basis for further thought and meditation.