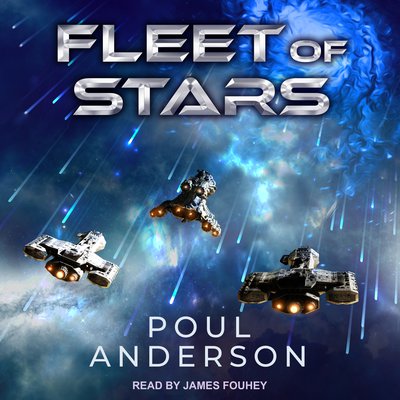 Far into the reaches of space, Anson Guthrie and a band of colonists have forged a new existence on Amaterasu not as physical beings but as downloaded consciousness watched over by the benevolent Life Mother. Yet as idyllic as their lives may be, back home on Earth the situation is growing grim.

Earth's inhabitants are now completely dependent—and so controlled—by an intelligent machine known as the Teramind. But the instinctual human desire to be free is not something the Teramind has included in its calculations. The seeds of rebellion are growing.

Suspecting a conspiracy to suppress humankind's last vestiges of freedom, Guthrie and his loyal companions make a dangerous journey back to Earth—risking everything to preserve humanity's independent destiny.

The thrilling conclusion to Anderson's four-volume, award-winning epic vision of mankind's evolution, begun in Harvest of Stars, "Fleet of Stars is a grand story that gets bigger and better with every page" (Larry Bond).