I Left My Haunt In San Francisco 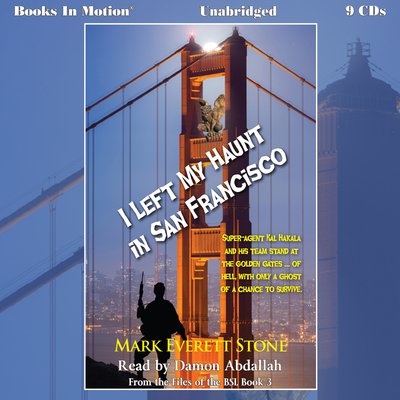 I Left My Haunt In San Francisco

After avenging himself on the mythical monster that killed his sister, Kal Hakela is back at the Bureau of Supernatural Investigation. But, with only a few months left on his contract, he’s tempted to retire along with his new love, former MI-7 agent Jeanie. When a friend and former BSI agent in San Francisco kills himself, he leaves Kal a clue, one he cannot ignore. The city is full of bad memories for Kal. In his last mission there, he killed a deranged serial rapist who used magic to murder his victims. Though successful, the mission resulted in unfortunate collateral damage, which earned Kal the enmity of San Francisco’s ghostly Supernatural protector. With the fate of every human on Earth at stake, Kal and his team confront a slew of Supernatural perils, from giant insects to gargoyles. And they must complete their mission without the help of the BSI, its magical weaponry, and the superhuman power of Kal’s legendary rage.