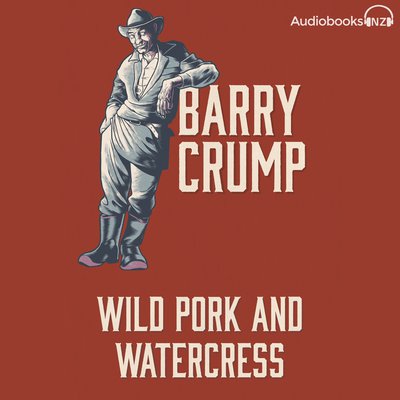 Barry Crump was one of New Zealand’s most popular authors of all time. From A Good Keen Man in 1960 through to his death in 1996, over a million copies of the 24 books he wrote were sold. He was a superb storyteller, who captured perfectly the laconic humour and the lifestyle of the rugged Kiwi outdoors man. His ability to craft a tale that is both moving and funny is superbly illustrated by the huge international success of the movie Hunt for the Wilderpeople, which is based on his book Wild Pork and Watercress.

Almost all of Barry Crump’s books are now out of print. A new volume of collected stories published in 2017 remedied that. And the five classic yarns comprising that volume are available in ebook form as separate titles – A Good Keen Man, Bullock Creek, Gold and Greenstone, Puha Road, and Wild Pork and Watercress.

About Wild Pork and Watercress:

When Ricky’s beloved Aunt Bella dies and Social Welfare threatens to put him into care, the overweight Maori boy and cantankerous Uncle Hec flee into the remote and rugged Ureweras. The impassable bush serves up perilous adventures, forcing the pair of misfits to use all their skills to survive hunger, wild pigs and the weather. Worse still are the authorities, determined to bring Ricky and Uncle Hec to justice. But despite the difficulties of life on the run, a bond of trust and love blossoms between the world-weary man and his withdrawn sidekick.

This rattling good yard has been made into a major movie Hunt for the Wilderpeople, written and directed by Taika Waititi.

Barry Crump was born in 1935 and died in 1996. In 1959 he began writing humorous sketches of life as a government deer-culler and pig hunter, publishing these in 1960 as A Good Keen Man. This became a massive bestseller in New Zealand and over the next 50 years he wrote another 23 books, which sold over a million copies.

As well as a best-selling author, Crump was an actor, TV personality, poet, radio commentator, man of leisure, traveller, goldminer, photographer and more. A successful 12-year association with Toyota brought a series of award-winning advertisements that catapulted Crump into living rooms around the country with his laconic, blokey style.

Crump was married five times and had six children, all sons. In the 1990s Crump was awarded an MBE and OBE for services to literature, something he was quietly proud of and reckoned would be hard case pinned to his Swanndri. He was listed in the Who’s Who as having no fixed abode, and regarded himself as a world citizen. He insisted that, first and foremost, he was just a Kiwi bushman.

A true New Zealand Classic. No wonder they made it into the film Hunt for the Wilderpeople.