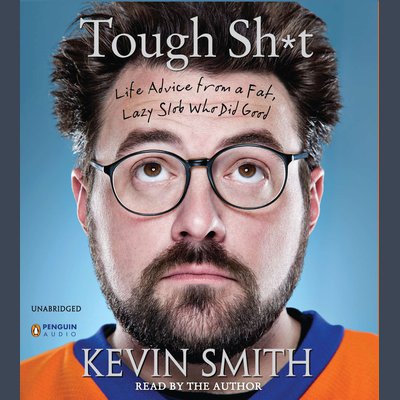 Life Advice from a Fat, Lazy Slob Who Did Good

That Kevin Smith? The guy who did "Clerks" a million years ago? Didn't they bounce his fat ass off a plane once? What could you possibly learn from the director of "Cop Out"? How about this: he changed filmmaking forever when he was twenty-three, and since then, he's done whatever the hell he wants. He makes movies, writes comics, owns a store, and now he's built a podcasting empire with his friends and family, including a wife who's way out of his league. So here's some tough shit: Kevin Smith has cracked the code.  Or, he's just cracked.

Tough Sh*t is the dirty business that Kevin has been digesting for 41 years and now, he's ready to put it in your hands. Smear this shit all over yourself, because this is your blueprint (or brownprint) for success. Kev takes you through some big moments in his life to help you live your days in as Gretzky a fashion as you can: going where the puck is gonna be. Read all about how a zero like Smith managed to make ten movies with no discernible talent, and how when he had everything he thought he'd ever want, he decided to blow up his own career. Along the way, Kev shares stories about folks who inspired him (like George Carlin), folks who befuddled him (like Bruce Willis), and folks who let him jerk off onto their legs (like his beloved wife, Jen).

So make this your daily reader. Hell, read it on the toilet if you want. Just make sure you grab the bowl and push, because you're about to take one Tough Sh*t.