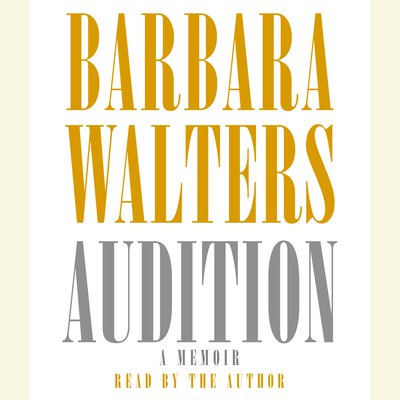 Young people starting out in television sometimes say to me:
"I want to be you." My stock reply is always: "Then you have to take the whole package."

And now, at last, the most important woman in the history of television journalism gives us that "whole package," in her inspiring and riveting memoir. After more than forty years of interviewing heads of state, world leaders, movie stars, criminals, murderers, inspirational figures, and celebrities of all kinds, Barbara Walters has turned her gift for examination onto herself to reveal the forces that shaped her extraordinary life.

Barbara Walters's perception of the world was formed at a very early age. Her father, Lou Walters, was the owner and creative mind behind the legendary Latin Quarter nightclub, and it was his risk-taking lifestyle that made Barbara aware of the ups and downs that can occur when someone is willing to take great risks.

The financial responsibility for her family, the fear, the love all played a large part in the choices she made as she grew up: the friendships she developed, the relationships she had, the marriages she tried to make work. Ultimately, thanks to her drive, combined with a decent amount of luck, she began a career in television. And what a career it has been! Against great odds, Barbara has made it to the top of a male-dominated industry.

She has spent a lifetime auditioning, and this book, in some ways, is her final audition, as she fully opens up both her private and public lives. In doing so, she has given us a story that is heartbreaking and honest, surprising and fun, sometimes startling, and always fascinating.