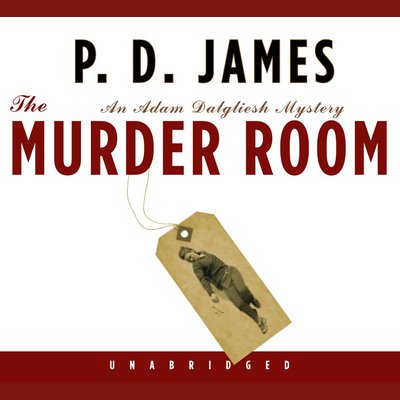 Commander Adam Dalgliesh, P. D. James’s formidable and fascinating detective, returns to find himself enmeshed in a terrifying story of passion and mystery — and in love.

The Dupayne, a small private museum in London devoted to the interwar years 1919 — 1939, is in turmoil. As its trustees argue over whether it should be closed, one of them is brutally and mysteriously murdered. Yet even as Commander Dalgliesh and his team proceed with their investigation, a second corpse is discovered. Someone in the Dupayne is prepared to kill and kill again. Still more sinister, the murders appear to echo the notorious crimes of the past featured in one of the museum’s galleries: the Murder Room.

The case is fraught with danger and complications from the outset, but for Dalgliesh the complications are unexpectedly profound. His new relationship with Emma Lavenham — introduced in the last Dalgliesh novel, Death in Holy Orders — is at a critical stage. Now, as he moves closer and closer to a solution to the puzzle, he finds himself driven further and further from commitment to the woman he loves.

The Murder Room is a powerful work of mystery and psychological intricacy from a master of the modern novel.

“You can’t possibly know him.”

“I can know enough,” Emma said. “I can’t know everything, no one can. Loving him doesn’t give me the right to walk in and out of his mind as if it were my room at college. He’s the most private person I’ve ever met. But I know the things about him that matter.”

But did she? Emma asked herself. Adam Dalgleish was intimate with those dark crevices of the human mind where horrors lurked which she couldn’t begin to comprehend. Not even that appalling scene in the church at St. Anselm’s had shown her the worst that human beings could do to each other. She knew about those horrors from literature; he explored them daily in his work. Sometimes, waking from sleep in the early hours, the vision she had of him was of the dark face masked, the hands smooth and impersonal in the sleek latex gloves. What hadn’t those hands touched? She rehearsed the questions she wondered if she would ever be able to ask. Why do you do it? Is it necessary to your poetry? Why did you choose this job? Or did it choose you?
— from The Murder Room