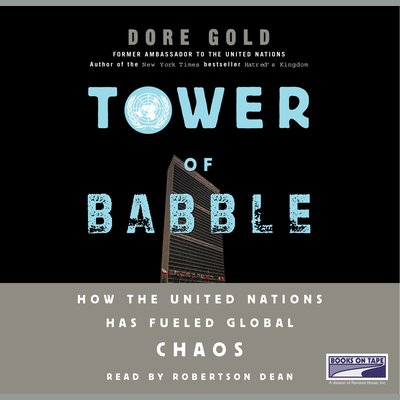 How the United Nations Has Fueled Global Chaos

Politicians and pundits are imploring the United States to give the UN a major role in American foreign policy. But as bestselling author Dore Gold reveals in Tower of Babble, it is absurd to look to the UN to fight aggression, combat terrorism, and preserve global order. The UN is an abject failure-a fatally flawed organization that has actually accelerated and spread global chaos. And it is dominated by anti-Western forces, dictatorships, state sponsors of terrorism, and America's worst enemies.

In his New York Times bestseller Hatred's Kingdom, Gold blew the lid off Saudi support for terrorism, and now he uncovers an even more important story. As a former UN ambassador, he has a unique insider's perspective on why the UN fails to address-or in many cases exacerbates-the very problems it was created to solve. He shows how President Franklin Roosevelt's great vision has been corrupted beyond recognition.

• How, in the space of a year, the UN turned a blind eye to two horrifying episodes of mass murder-and why the slaughters could have been prevented

As this hard-hitting book reveals, it is, quite simply, a myth that the United Nations is a positive force for world order or the "sole source of international legitimacy." And unless the United States and its allies recognize this now, they will continue to put themselves at risk.

"Dore Gold's book is informed and informative. It can be read with pleasure and profit by anyone with a genuine interest in the United Nations. I warmly recommend it."--Jeane J. Kirkpatrick, former Ambassador to the United Nations

"For anyone wondering what's wrong with the United Nations, this is the book to read. Providing both a concise history and an urgent warning for our own time, Dore Gold in clear and lively detail explains how and why the UN too often promotes not peace, but problems--and what we can do about it."--Claudia Rosett, columnist, the Wall Street Journal's Opinionjournal.com

"Dore Gold's Tower of Babble is bound to be one of the most controversial critiques in the public debate on the UN."--Henry Kissinger, Former Secretary of State