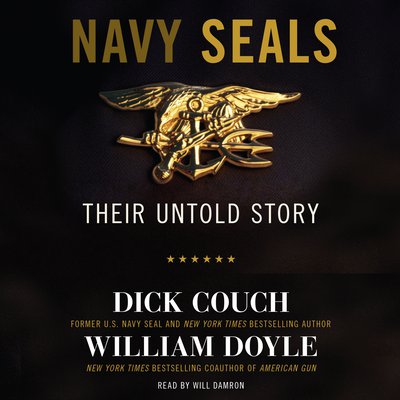 Written with the unprecedented cooperation of the Naval Special Warfare community, here is the definitive history of the U.S. Navy SEALs, a thrilling chronicle that reveals the inside story behind the greatest combat operations of our nation's most celebrated warriors. New York Times bestselling authors Dick Couch-former SEAL, Vietnam veteran, and highly respected military writer-and award-winning author William Doyle draw on exclusive interviews with more than 100 special operators (including multiple Medal of Honor recipients), as well as thousands of pages of declassified documents to create a vivid, unparalleled portrait of the SEALs in action.

Navy SEALs: Their Untold Story charts the dramatic evolution of the frogmen from their origins in World War II, when the daring Naval Combat Demolition Teams, Underwater Demolition Teams, Scouts and Raiders commando units, and OSS Operational Swimmers proved instrumental at D-Day, Okinawa, and many other critical campaigns. In the Korean War, the Navy UDTs cleared mines and scouted landing sites ahead of the main American forces. After their official founding in 1962 by order of President John F. Kennedy and early covert operations in Cuba, the SEALs came of age in the jungles of Vietnam, where they specialized in executing the most daring missions. Couch and Doyle trace their transformation in the 1980s and 1990s-when America's special operations teams were centralized under the U.S. Special Operations Command-including untold accounts from Panama, Grenada, Somalia, and the first Gulf War. Finally, we follow their rise to preeminence in Iraq and Afghanistan after 9/11.

The SEALs and their forefathers have shaped the tides of history; from fighting Hitler to eliminating Osama bin Laden, the frogmen of the U.S. Navy are the spearhead of American military might: the toughest, most highly trained, best equipped-and most invisible-band of warriors. Now many of these quiet professionals, speaking for the first time, reveal what it's like to be the men living on the knife's edge. Navy SEALs: Their Untold Story gives these legendary warriors the epic chronicle they deserve.