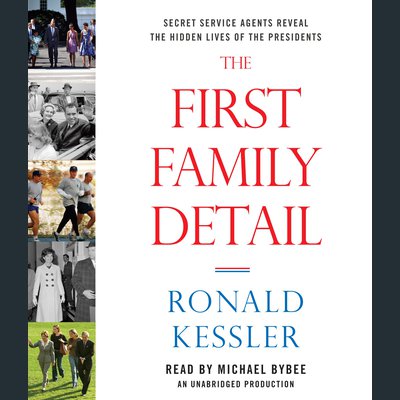 Secret Service Agents Reveal the Hidden Lives of the Presidents

As in a play, presidents, vice presidents, and presidential candidates perform on stage for the public and the media. What the nation's leaders are really like and what goes on behind the scenes remains hidden. Secret Service agents have a front row seat on their private lives and those of their wives and children.

Since publication of his New York Times bestselling book In the President's Secret Service, award-winning investigative reporter Ronald Kessler has continued to penetrate the wall of secrecy that surrounds the U.S. Secret Service, breaking the story that Secret Service agents who were to protect President Obama hired prostitutes in Cartagena, Colombia and revealing that the Secret Service allowed a third uninvited guest to crash a White House state dinner.

Now Kessler presents far bigger and more consequential stories about our nation's leaders and the agency sworn to protect them. Kessler widens his scope to include presidential candidates, former presidents after they leave the White House, and the presidents' relationships to their first ladies and children.

From observing Vice President Joe Biden's reckless behavior that jeopardizes the country's safety, to escorting Bill Clinton's mistress at Chappaqua, to overhearing First Lady Michelle Obama's admonitions to the president, to witnessing President Nixon's friends bring him a nude stripper, to seeing their own agency take risks that could result in an assassination, Secret Service agents know a secret world that Ronald Kessler exposes in breathtaking detail.

· Vice President Joe Biden regularly orders the Secret Service to keep his military aide with the nuclear football a mile behind his motorcade, potentially leaving the country unable to retaliate in the event of a nuclear attack.

· Secret Service agents discovered that former president Bill Clinton has a blond mistress. Within minutes of Hillary Clinton's leaving, the woman-codenamed Energizer by agents-shows up to be with Bill every day while the likely future presidential candidate is away.

· The Secret Service covered up the fact that President Ronald Reagan's White House staff overruled the Secret Service to let unscreened spectators get close to Reagan as he left the Washington Hilton, allowing him to be shot by John W. Hinckley Jr.

· Secret Service agents have been dismayed to overhear Michelle Obama push her husband to be more aggressive in attacking Republicans and to side with blacks in racial controversies.

· Secret Service Director Mark Sullivan diverted agents from protecting President Obama and his family at the White House and ordered them instead to protect his assistant at her home and illegally retrieve confidential records as a favor to her.

· Because Hillary Clinton is so nasty to agents, being assigned to her protective detail is considered a form of punishment and the worst assignment in the Secret Service.

· Secret Service agents were ordered to ignore security rules and allow the SUV carrying actor Bradley Cooper to drive unscreened into a secure restricted area when President Obama was about to deliver his speech at the White House Correspondents Dinner.

· Vice President Joe Biden spends millions of taxpayer dollars flying to and from his home in Delaware on Air Force Two. His office tried to cover up the costs of the personal trips.

· Because the Secret Service refused to provide enough magnetometers at his campaign events, Mitt Romney regularly left himself open to assassination by giving speeches to unscreened crowds.

· Vice President Joe Biden swims nude at the vice president’s residence in Washington and at his home in Delaware, offending female agents.

From the Hardcover edition.