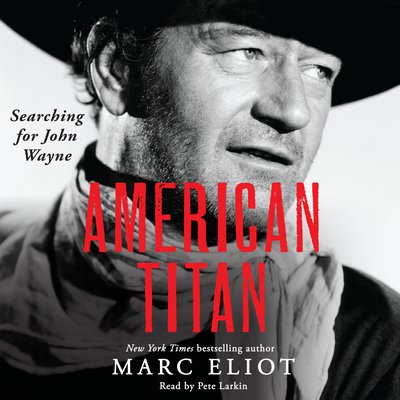 As he did in his bestselling biographies of Cary Grant, Jimmy Stewart, and Clint Eastwood, Marc Eliot offers an exciting, groundbreaking new take on an American icon-the most legendary Western film hero of all time, John Wayne

An audience favorite and top box-office draw for decades, John Wayne symbolized masculinity, power, and patriotism, and inspired millions of Americans. Yet despite his popularity and success, he was unfairly dismissed as a "B" movie actor lacking elegance, creativity, range, and depth. American Titan challenges conventional wisdom and reevaluates Wayne's life and vital cinematic legacy, ultimately placing the man known as "Duke" among a select and brilliant pantheon of "actor auteurs"-artists whose consistency of style in their work reflects their personal creative vision.

In American Titan, Eliot demonstrates that Wayne possessed a distinct and remarkable vision rooted in his unique Midwestern and West Coast childhood that would become manifest in one of the most enduring screen personalities of all time: the elusive, stoic frontier loner. Wayne's heroic outsider also influenced a new generation of actors and filmmakers who would borrow from it to use in their own movies.

Drawing on his deep, extensive knowledge of Hollywood and film, Eliot contends that the primary driving force behind Wayne's extraordinary career and body of work was the result of his own ambitions and his collaborations with directors John Ford and Howard Hawks. Eliot offers as evidence the distinct personality that runs through Wayne's staggering 169 films, from Stage Coach and The Searchers to The Quiet Man and The Green Berets.

Setting Wayne's life within the sweeping political and social transformations that defined the nation, Eliot's masterly revisionist portrait is a remarkable in-depth look at a life that embodied the spirit of the twentieth century. What emerges is nothing less than a powerful understanding of and appreciation for a true American titan.