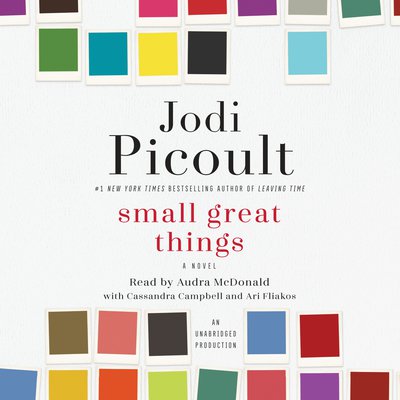 #1 NEW YORK TIMES BESTSELLER • With richly layered characters and a gripping moral dilemma that will lead readers to question everything they know about privilege, power, and race, Small Great Things is the stunning new page-turner from Jodi Picoult.

SOON TO BE A MAJOR MOTION PICTURE

"[Picoult] offers a thought-provoking examination of racism in America today, both overt and subtle. Her many readers will find much to discuss in the pages of this topical, moving book."-Booklist (starred review)

Ruth Jefferson is a labor and delivery nurse at a Connecticut hospital with more than twenty years' experience. During her shift, Ruth begins a routine checkup on a newborn, only to be told a few minutes later that she's been reassigned to another patient. The parents are white supremacists and don't want Ruth, who is African American, to touch their child. The hospital complies with their request, but the next day, the baby goes into cardiac distress while Ruth is alone in the nursery. Does she obey orders or does she intervene?

Ruth hesitates before performing CPR and, as a result, is charged with a serious crime. Kennedy McQuarrie, a white public defender, takes her case but gives unexpected advice: Kennedy insists that mentioning race in the courtroom is not a winning strategy. Conflicted by Kennedy's counsel, Ruth tries to keep life as normal as possible for her family-especially her teenage son-as the case becomes a media sensation. As the trial moves forward, Ruth and Kennedy must gain each other's trust, and come to see that what they've been taught their whole lives about others-and themselves-might be wrong.

With incredible empathy, intelligence, and candor, Jodi Picoult tackles race, privilege, prejudice, justice, and compassion-and doesn't offer easy answers. Small Great Things is a remarkable achievement from a writer at the top of her game.

"Small Great Things is the most important novel Jodi Picoult has ever written. . . . It will challenge her readers . . . [and] expand our cultural conversation about race and prejudice."-The Washington Post

"A novel that puts its finger on the very pulse of the nation that we live in today . . . a fantastic read from beginning to end, as can always be expected from Picoult, this novel maintains a steady, page-turning pace that makes it hard for readers to put down."-San Francisco Book Review

"A gripping courtroom drama . . . Given the current political climate it is quite prescient and worthwhile. . . . This is a writer who understands her characters inside and out."-Roxane Gay, The New York Times Book Review

"It's Jodi Picoult, the prime provider of literary soul food. This riveting drama is sure to be supremely satisfying and a bravely thought-provoking tale on the dangers of prejudice."-Redbook

"Jodi Picoult is never afraid to take on hot topics, and in Small Great Things, she tackles race and discrimination in a way that will grab hold of you and refuse to let you go. . . . This page-turner is perfect for book clubs."-Popsugar